The Earth is Enough (Pruett) (Paperback) 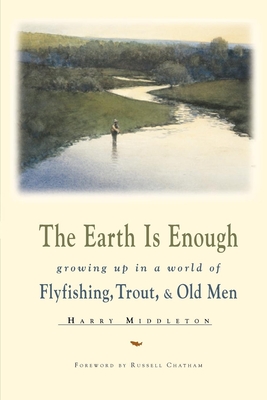 In this touching memoir of his boyhood on a farm in the Ozark foothills, Harry Middleton joins the front rank of nature writers alongside Edward Hoagland and Annie Dillard.

It is the year 1965, a year rife with change in the world---and in the life of a boy whose tragic loss of innocence leads him to the healing landscape of the Ozarks. Haunted by indescribable longing, twelve-year-old Harry is turned over to two enigmatic guardians, men as old as the hills they farm and as elusive and beautiful as the trout they fish for---with religious devotion. Seeking strength and purpose from life, Harry learns from his uncle, grandfather, and their crazy Sioux neighbor, Elias Wonder, that the pulse of life beats from within the deep constancy of the earth, and from one's devotion to it. Amidst the rhythm of an ancient cadence, Harry discovers his home: a farm, a mountain stream, and the eye of a trout rising.

Harry Middleton was a writer and author of five books on fishing and the outdoor lifestyle. He wrote intensely descriptive prose using a wide- ranging vocabulary to create sparkling stories about wild places and remote trout streams. He was a critically acclaimed author whose books include "The Earth is Enough: Growing Up in a World of Flyfishing, Trout, and Old Men (1989)," On the" Spine of Time: a Flyfisher's Journey among Mountain People, Streams, & Trout (1991"), "The Bright Country: a Fisherman's Return to Trout, Wild Water and Himself (1993)" and "Rivers of Memory (1993)." He is the recipient of the Friends of American Writers Award, the Outdoor Writers Association of American Best Book Award, and the Southeastern Outdoor Press Best Book Award.

Harry was born in 1949 and grew up in the south graduating from Northwestern State University in Natchitoches, Louisiana with an English degree. He earned a master's degree in Western history from Louisiana State University in 1973. He wrote the "Outdoor South" column for "Southern Living" magazine from 1984 to 1991. He passed away unexpectedly in 1993 at the age of 43. He is survived by his widow, and two sons.