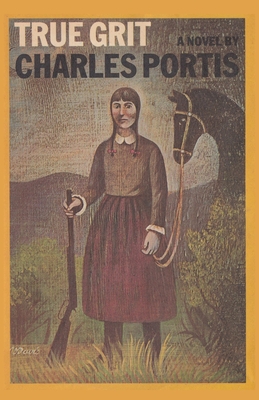 By Charles Portis, Sam Sloan (Introduction by)
$22.50
Email or call for price.

With its excitement, its aliveness, its comic sympathy and originality, True Grit swoops the reader up and gallops him off into a classic American Landscape, freshly and brilliantly perceived.

The action - and what action - begins on page 1, as Mattie Ross, a fourteen year old girl from Dardanelle Arkansas, sets out in the winter of eighteen seventy something to avenge her Daddy, treacherously shot to death by a no-good drunken outlaw. Since not even Mattie ( who is no self-doubter) would ride into Indian Territory alone, she "convinces" one-eyed "Rooster" Cogburn, the meanest available U. S. Marshall, to tag along with her.

As Mattie outdickers and outmaneuvers the hard-bitten types whose first reaction is to "run home, little britches, your mama wants you," as her performance under fire makes them eat their words, her indestructible vitality and harsh innocence by turns amuse, horrify and touch the reader. What happens - to Rooster, to Mattie, to the gang of outlaws unfortunate enough to tangle with her - rings with the dramatic rightness of legend and the marvelous overtones, the continual surprises, of personality.

True Grit, is eccentric, cool, straight and unflinching, like Mattie herself, who tells the story a half-century later in a voice that sounds strong and sure enough to outlast us all. It was a voice quite heard before and at the same time instantly recognizably as totally original and totally alive.

True Grit is a 1968 novel by Charles Portis that was first published as a 1968 serial in The Saturday Evening Post. The novel is told from the perspective of a woman named Mattie Ross, who recounts the time when she was 14 and sought retribution for the murder of her father by a scoundrel, Tom Chaney. It is considered by some critics to be "one of the great American novels."

The novel was adapted for the screenplay of the 1969 film True Grit starring Kim Darby, Glen Campbell, and John Wayne. Six years later, in 1975, Wayne reprised his Academy Award-winning role as the tough hard drinking one-eyed lawman in the sequel film Rooster Cogburn.